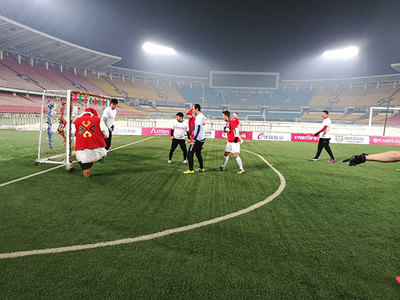 The aim of inviting the Finnish football team to China is to bring surprise and happiness to Chinese football fans on Christmas Eve.

In the end, Santa Claus team won the game by leading China all-star team one goal.

The red-and-white team was introduced by the founder of Bewin sports, Gao Feng, who became a shareholder and vice-president of FC Santa Claus last year.

Rovaniemi, the capital of Finnish Lapland， is situated on the Arctic Circle at the heart of the Barents region, some 835 km from the capital Helsinki. The region claims to be Santa's home, with a complete snow cover regularly from October to April.