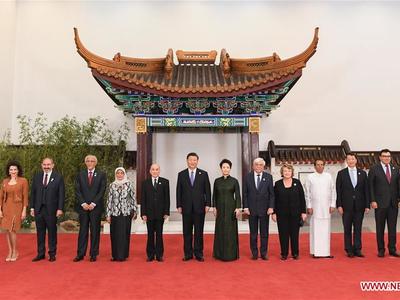 Chinese President Xi Jinping and his wife Peng Liyuan hosted a banquet Tuesday evening in honor of guests who are in Beijing for the upcoming Conference on Dialogue of Asian Civilizations (CDAC).

When delivering a speech at the banquet in the Great Hall of the People, Xi said the CDAC is held in line with the general trend of cooperation and development in Asia and the expectations of people of all countries for exchanges and mutual learning among civilizations.

The conference, to kick off on Wednesday, will serve as an exchange and mutual learning platform for the common development of various civilizations, Xi said.

Noting that Asia is a major birthplace of human civilization, Xi said Asian civilizations have exchanged amid openness, grown together thanks to inclusiveness, and developed through innovation, to become splendid on the world stage.

China adheres to the protection and inheritance of its fine traditional culture, promotes exchanges and mutual learning between Chinese and foreign civilizations, and contributes to the progress of human civilization, he added.