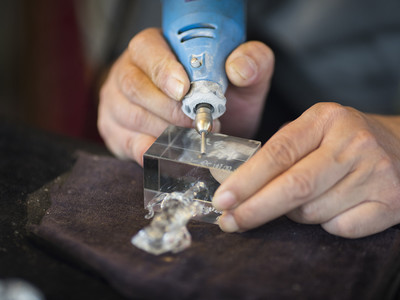 Wearing a leather apron, Zhang holds a glass disc with both hands against a rapidly spinning grinding wheel that is used for carving designs into glass. A glass artist carefully controls the angel and the strength with their hands. About one hour later, a vibrant peacock appears in the glass.

Zhang's workshop in northern China's Tianjin Municipality is full of glass carving, etching and painting artwork. On a large piece of glass, 1 meter long and 0.6 meters wide, a carved lion "sways" his mane in the wind. The delicate work often draws admiring visitors.

"You cannot feel the engraving traces on the front side when you touch the glass, for the image and the characters are carved on the reverse side," Zhang said, adding that the back side would be coated with a layer of aluminum or silver as a mirror.

Zhang was enthralled in the art of glass since his childhood. "My father, a local folk artist in glass carving, often made exquisite glass works in our old, shabby house," he recalled.

He worked in a mirror making factory as a glass carver in 1979. Zhang recalled that he, as a beginner, had broken many pieces of glass until he was able to finish his first glass carving work.

The edge of the ground glass can be as sharp as the blade, and his hands were often injured. When this happened, Zhang would just grab a band-aid and continue to work.

Though tedious and demanding the work seems to be, Zhang said he is satisfied and happy to dedicate himself to glass carving.

In order to sharpen their artistry, Zhang, together with his collogues, created many new grinding wheels of different sizes and shapes.

"From normal round grinding wheels to cam and triangular ones, we have made many improvements. These grinders are like paintbrushes, which can create different patterns with various textures in the glass," he said.

In its heyday, carved, etched and painted glass was purchased by nearly every family in China. They were used to decorate furnitures such as wardrobes and wine cabinets and regarded as popular gifts in weddings and birthday parties. However, its shine has been gradually lost in modern times.

Feathers are a common element in glass carving crafts for auspicious bird images, like the red-crowned crane, which is traditionally considered as a symbol of longevity.

Old craftsmen need to grind dozens of times to show the texture of crane's feather. He adapted a grinding wheel which can produce feathers of birds in an easier and more vivid way.

With Zhang's efforts, the craftsmanship of glass carving was listed as one of Tianjin's intangible cultural heritages in 2017. In the same year, Zhang founded his own studio to pass down glass carving to younger generations.

However, young people regard it as a daunting art. To attract more lovers of the glass carving, Zhang strives to brighten the art by integrating glass carving elements into daily-use handicrafts like goblets, tea sets and jewelry boxes.

"My father has not given up glass art even in his 90s. It is his dream, and now it is mine," Zhang said.