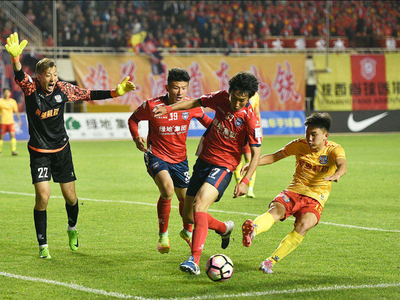 The increase in football development in northwest China's Xinjiang Uyghur Autonomous Region is a result of "pairing-up support for Xinjiang" from provincial-level regions.

In March 2010, China unveiled a new action plan calling for other regions to streamline and enhance aid delivery for Xinjiang. A total of 19 provinces and municipalities were paired with different cities and regions of Xinjiang.

Lgamberdi, a football coach in a primary school of Luopu County, said though the equipment and coaches were limited, students still showed great enthusiasm in playing football.

"With this new equipment, we will strive to perform better in competitions and cultivate more footballing talents," Lgamberdi said.

Memet Azizi, director of Cele County's bureau of education, said that Tianjin's help had brought them hope for the future.

With support from Tianjin, a standard football field and training center was constructed at Cele County's No. 1 Primary School.

Muratjan Muhtar, captain of the school's football team, met his idol Mirahmetjan Muzepper in Tianjin a month ago. The captain of Chinese Super League side Tianjin Teda is also a Xinjiang native, and encouraged Muhtar to stick to his dream.

"I want to be like him, and I will insist on training hard to win glory for China in the future," Muhtar said.

Anzarjan, another primary student from Yutian County, said he hoped to play football in Tianjin when he grows up.

"I saw the desire and passion to play football from these children. It's our responsibility to make their dream come true," said Zhang Xin, deputy director of the Tianjin sports bureau, and head of the Tianjin Football Association.

According to Zhang, Tianjin will continue to provide Xinjiang with coaches, equipment, and advanced training methods, and help the region cultivate excellent football players.

A total of 12 football-focused schools were established in Xinjiang's Hetian City, which now contains over 500 football fields.

Xu Ming, head of the Xinjiang Football Association, said the organization would look to promote the development of football in Hetian by cooperating further with Tianjin, in order to further contribute to the reform and development of Chinese football as a whole.