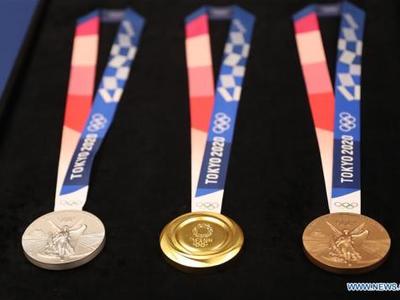 The organizers of Tokyo 2020 Olympics and Paralympics on Wednesday unveiled the medals to be presented at the Games next summer.

The medals feature Nike, the mythical Greek goddess of victory, as stipulated by the International Olympic Committee. On the back, the medals bear the Olympic rings and Tokyo 2020 logo inside a swirl design.

Conceived by Japanese designer Junichi Kawanishi, the design of the medals is simple, but the curves in various angles make the medals three-dimensional and look shiny from any direction.

"With their shining rings, I hope the medals will be seen as paying tribute to the athletes' efforts, reflecting their glory and symbolizing their friendship," Kawanishi said.

The medals are 85 millimeters in diameter and are about 12 millimeters thick, just as they were in the two previous Summer Games in London and Rio de Janeiro.

The gold medal weighs 556 grams, the silver 550 grams and the bronze 450 grams. According to the local organizing committee, the gold and the silver are the heaviest in the history of the Summer Olympics.

Approximately 5,000 medals will be made from recycled metals extracted from mobile phones and other small electronic devices. The Paralympic medal design will be revealed in August.

The Tokyo Olympic Games will be held from July 24 to August 9, 2020, followed by the Paralympic Games from August 25 to September 6.