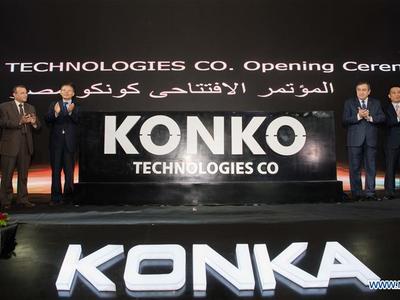 Photo taken on Aug. 1, 2019 shows a view of the opening ceremony of Konka's factory in Cairo, Egypt. [Photo/Xinhua]

With an investment of 30 million U.S. dollars, the new factory plans to achieve an annual production capacity of 600,000 LED TV sets, providing jobs for more than 600 Egyptians.

"Egypt has a large population, a stable political condition, and a relatively good investment environment and policies. This is why we have chosen to build our factory here," Zhou Chi, general manager of Konka's international business division, told Xinhua.

Zhou said Konka's factory in Egypt can be a portal for its products in the African market as Egypt is an important country in China's Belt and Road Initiative for multinational common development.

The project is a joint venture between Konka Group and Egypt's HOHO Electronic & Furniture Co.

The factory represents the first phase of Konka's planned 100-million-dollar investment in Egypt.

The second phase is planned to invest 70 million dollars in setting up a manufacture industrial park that can expand the LED TV production to 1 million units.

It is expected to create 1,500 job opportunities for Egyptians and become Konka Group's manufacturing base for the markets of the Middle East, Africa, Europe and the United States.

"The factory is a big step in technology transfer to Egypt," said Khaled Mostafa, secretary general of Cairo Chamber of Commerce.

"I believe Konka's factory will be a new plus to the growing Chinese products that gained the trust of the Egyptian consumers," he told Xinhua.

Mostafa pointed out that Konka will also benefit from both Egypt's high consumption and free trade deals in the region, such as the Common Market for Eastern and Southern Africa (COMESA) and Agadir free trade agreement involving Egypt, Morocco, Jordan and Tunisia.