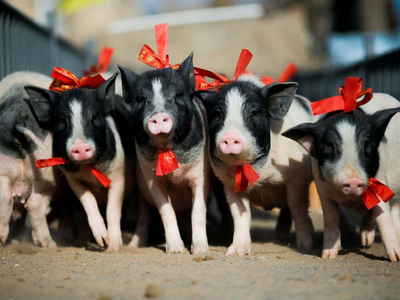 China has decided to offer subsidies from the central budget to large pig farms to support their facilities construction in the latest effort to stabilize pork supply.

One-off subsidies will be handed out to newly built or rebuilt pig farms, scale farmers as well as some relocation projects before the end of 2020, according to work plans jointly released by the National Development and Reform Commission and the Ministry of Agriculture and Rural Affairs.

The funds will be used to support the construction of facilities including epidemic prevention and automatic feed plants.

In principle, the central subsidies, ranging between 500,000 yuan (about 70,570 U.S. dollars) to 5 million yuan, should not exceed 30 percent of the total project investment, said the plans.

In 2020, China will also select 100 counties with breeding stocks of more than 100,000 pigs to push waste utilization, with subsidies of no more than 30 million yuan.

The move came as China's pig supply had shrunk substantially due to multiple factors including African swine fever and higher costs of pig breeding, which pushed up pork prices.

Last week, the Ministry of Finance said it would strengthen its fiscal policies to boost hog production and guarantee stable pork supply.