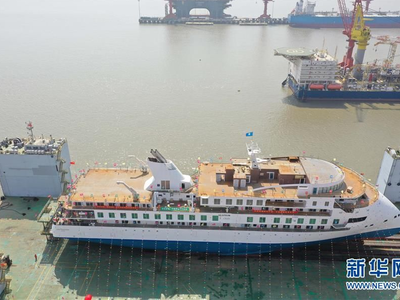 Constructed by China Merchants Industry Holdings, a subsidiary of the China Merchants Group, the cruise ship was delivered to the U.S.-based cruise vessel provider Sunstone Friday.

The Greg Mortimer left a wharf of the shipbuilder's production base in Haimen, eastern China's Jiangsu Province at 8 a.m. Monday.

It will pass through Singapore, the Cape of Good Hope in South Africa and then cross the Atlantic Ocean to Ushuaia, the world's southernmost city. It is expected to arrive in the Antarctic region by the end of October for a two-week exploration tour.

The 104.4-m long vessel is 18.4 meters at the beam and can operate at a speed up to 16.3 knots. With 135 cabins which can accommodate 254 people on board, the Greg Mortimer combines recreation, food and entertainment, marine adventure and water sports all in one place.