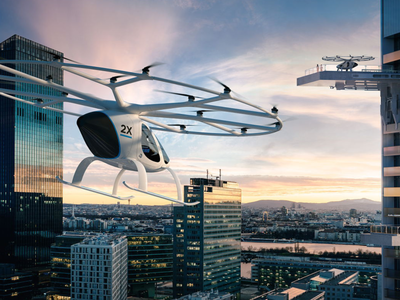 Chinese private carmaker, Zhejiang Geely Holding Group, on Monday announced to participate in a funding-raising round for shares in the German aircraft manufacturer Volocopter.

Both Geely and German automaker Daimler AG joined Volocopter's Series C funding round for 50 million euros. Through the financing, each of the two parties acquired 10 percent of shares in Volocopter.

The new fund will be used to bring Volocopter's Volocity air taxi to commercial launch in three years when Volocopter hopes to obtain commercial certificate by the Aviation Safety Authority (EASA) for the electric flying vehicle.

The two-seat flying car is designed with a flying speed of 110 km per hour in a single range of 35 km, which can be applied for short-distance travel.

Geely has also agreed to enter a joint venture with Volocopter to bring the urban air mobility technology to China, said the company chairman Li Shufu.

Geely with brands of Geely and Volvo cars has formed a partnership with Daimler AG for developing smart electric models in China. The joint investment in Volocopter is the two parties' new cooperation commitment.