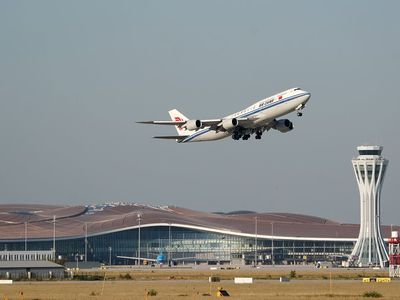 The maiden flight served between Beijing and Guangzhou in south China. Following it, six other Chinese airlines started their respective first flight via the new airport.

Xi, also general secretary of the Communist Party of China (CPC) Central Committee and chairman of the Central Military Commission, attended the operation ceremony of the airport on Wednesday morning.

Xi stressed that the new airport, which was built in less than five years and put into operation smoothly, has shown China's prowess in engineering construction.

It is also a display of the political advantages of the CPC leadership and China's socialist system that can mobilize all sources to make great achievements, said Xi.

Located 46 km south to downtown Beijing, the new aviation hub is shaped like a phoenix spreading its wings. Its passenger throughput and cargo throughput are expected to reach 72 million and 2 million tonnes respectively by 2025, with 620,000 takeoffs and landings.

It only takes a passenger eight minutes to walk from the center of the terminal building to the furthest departure gate.

Zeng Qingwei, a passenger taking China Eastern Airlines' first flight at the new airport, said it took him one minute to complete the check-in process with baggage.

"The automated check-in with facial recognition is very convenient," said the passenger leaving for Shanghai.

"I've been around airports for over 30 years and I can't recall seeing such an impressive facility," said Fortson.

Zhang Tao, the maiden flight pilot, said prior to the service that he has worked as a pilot for 30 years, witnessing Chinese airports grow from simple beginnings to this massive aviation hub.

"The change represents a great advancement in the national strength," said Zhang. 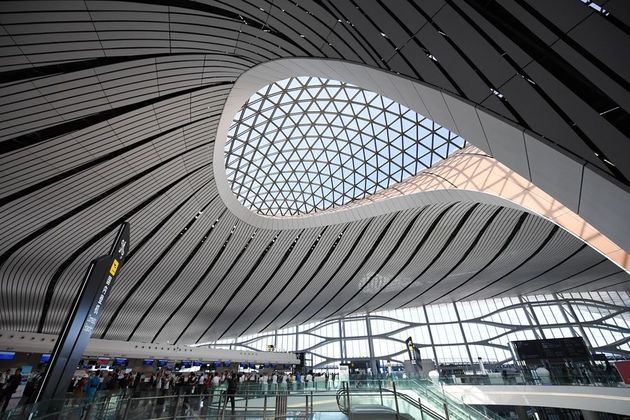 The new airport emerges as a pivotal air traffic hub for international travel to and from China as the country is poised to become the world's largest civil aviation market around the mid-2020s.

Liu Chunchen, director of the airport department of China Civil Aviation Administration, said the combined annual passenger handling capacity of the Daxing airport and the Beijing Capital International Airport in the northeast of the city will exceed 250 million in the future.

According to the Daxing airport authority, 66 airlines have applied to operate at the airport. Among them, 20 are domestic airlines and 46 overseas ones. The airport will operate 116 routes connecting to 112 destinations globally around the end of this year.

The Daxing airport is expected to take pressure off the capital airport, which has three terminals. The capital airport, beginning operation in 1958, recorded a passenger throughput of over 100 million in 2018, already surpassing its maximum passenger handling capacity.

Starting from a metro station in the third southern ring road of Beijing, a passenger can reach the new airport's terminal building in 19 minutes, thanks to the Beijing municipal government's investment in supporting facilities for the airport.

The airport, which took five years to build, is 82 km away from Tianjin Municipality and 197 km away from Shijiazhuang, capital of neighboring Hebei Province.

The airport's role as the regional transport hub would greatly facilitate China's strategy to integrate the development of Beijing, Tianjin and Hebei and help create a development model with a better economic structure, cleaner environment, and improved public services in the city cluster, said Wang Youguo, district chief of Daxing.

On Aug. 31, the Daxing airport free trade zone (FTZ) was officially inaugurated as China's only cross-provincial FTZ pilot area. Covering an area of 19.97 square km, the FTZ serving Beijing, Tianjin and Hebei is a magnet for international firms specialized in aviation logistics and aviation technology.

Wang said the FTZ will pilot policies facilitating access to foreign investment to boost the opening-up of Beijing's service sector.