Chinese American film, TV festival to be held in Hollywood 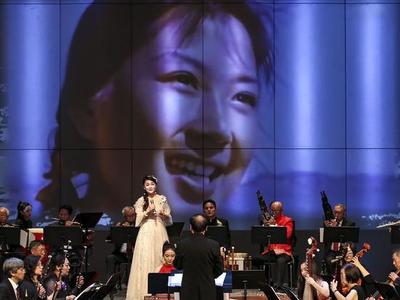 A grand concert featuring Chinese film music in the past 70 years was held in Los Angeles, the United States, on Sept. 19, 2019. [Photo/Li Ying (Xinhua)]

Founded in 2005 by EDI Media Inc. (USA), the festival is a cultural event to promote film and television industry exchanges and cooperation. In addition to grand ceremonial activities, on Nov. 3-30, the 15th CAFF and CATF will hold a dozen sub-events including Film and Television Summit, Film and Television Market, Presentation of the Golden Angel Awards and Film and Television Work Showcases.

Each year, the Film and Television Market hosts more than 300 participants who exchange and cooperate on the platform. More than 500 outstanding Chinese and American films have been screened with a total number of viewers exceeding 1.3 million in the past 14 years.

"The annual Chinese American Film Festival and Chinese American TV Festival is a bridge to promote cultural exchange between the East and the West," said the chairman of CAFF and CATF, and Chairman of EDI Media Inc., James Su in a press conference here.

"We hope to present more excellent film and TV works from China and the United States to American people this year," he noted.

"Fifteen years on, the annual Chinese American Film Festival and Chinese American TV Festival has become an important platform for the cultural exchanges and industry cooperation between China and the United States, contributing a great deal to the friendship and mutual understanding between our two peoples," said Wang Jin, cultural consul of the Chinese Consulate General in Los Angeles.