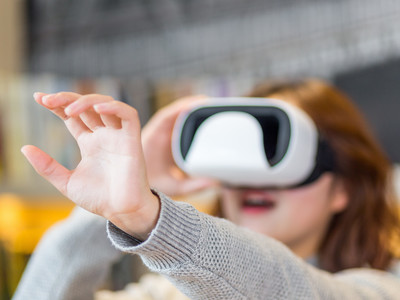 A Chinese virtual reality (VR) movie was selected to play in the VR Theater at the 24th Busan International Film Festival in the Republic of Korea (ROK).

The movie "Half-Hundred Mirrors," was the only VR movie from the Chinese mainland to be displayed during the event held earlier this month, along with 40 other films from 12 countries and regions.

Directed by Yu Hong, a professor with the Central Academy of Fine Arts, the movie features oil painting elements and tells the story of a group of children's lives from their birth to adulthood, reflecting the changes in society.

Researchers from Tianjin University adopted the 3D immersive VR technology into the movie.

Han Dong, an associate professor of the College of Intelligence and Computing at Tianjin University and the chief technical director of the movie, said his team spent half a year finishing the film. They adopted advanced technologies such as digital collecting, computer graphic modeling and human-computer interaction into the movie.

"My team is engaged in the research on digital museum display, and VR & AR interactive fields. VR film is another exploration in digital media art," Han said.

The computer system and sensor technology can create a three-dimensional environment. People's visual sense, auditory sense and tactile sense can be simulated in this environment so that people may immerse themselves in the virtual world.

When the audience puts on the VR headset, a 360-degree view will be presented.