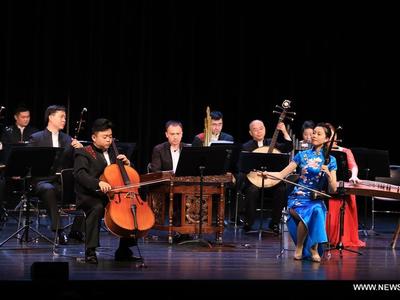 The China National Traditional Orchestra (CNTO) gave a concert in Belgian port city of Antwerp Tuesday night to celebrate the 70th anniversary of the founding of the People's Republic of China.

Featuring Chinese traditional music, the concert attracted an audience of more than 300.

At the end of the concert, the artists won prolonged applause from the audience, and gave an encore.

Philippe Deckers, a local audience, said after the performance that "I'm very happy that I got the opportunity to discover this traditional Chinese music. I was very impressed by the technical display, the harmony, the flexibility of the Chinese musicians. It was really fabulous".

"My son is currently in China studying Mandarin, because I believe Chinese will be a very important language in the future," he said.

Tang Feng, music director of the CNTO, told reporters: "On the occasion of the 70th anniversary of the founding of the People's Republic of China, all the performers of the China National Traditional Orchestra, with their high standard of artistic performance and dedication, showed the world the long history of traditional Chinese folk music."

The concert in Antwerp is the first leg of the CNTO's European tour. It will also perform in Belgian cities of Brussels and Leuven, before continuing its tour to other European cities.