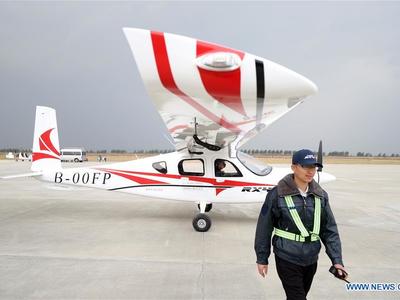 Developed by Liaoning General Aviation Academy (LGAA), the 1,200 kg aircraft is 8.4 meters long with a wingspan of 13.5 meters. It has a range of 300 km and is capable of flying about one and a half hours for a single flight.

The aircraft uses carbon fiber composite material and is very light. It can take off on hard grassland and gravel road, according to Zhao Tienan, deputy head of LGAA.

"The RX4E aircraft has a huge market prospect. It can be used in a number of fields such as short-distance transportation, pilot training, sightseeing, aerial photography and aerial mapping," Zhao said.