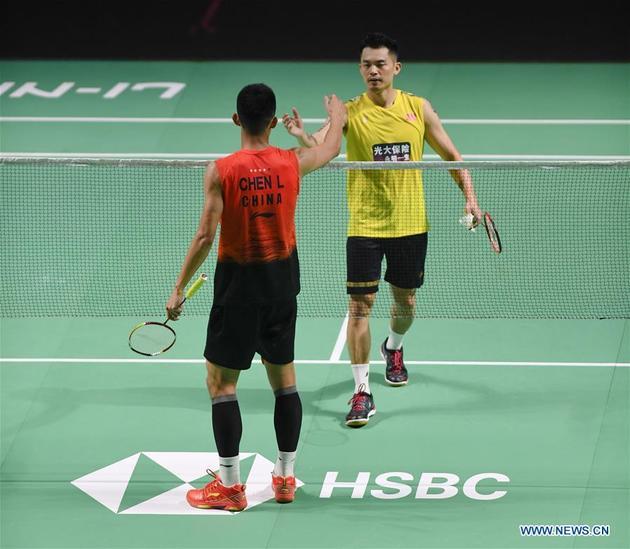 Two-time Olympic champion Lin Dan denied rumors on Wednesday that he would retire soon from competitive badminton despite an early farewell to the BWF Fuzhou China Open held at his home province.

The Chinese legendary shuttler won the first game 21-19 against teammate Chen Long in the men's single first-round action before conceding the next two in 21-12 and 21-12. Lin said afterwards that he still dreams about his fifth Olympic journey and won't retire soon.

"I didn't know the rumors [that I will retire after Fuzhou China Open], I think it's too early to talk about retirement. I won't give up trying to qualify for the 2020 Olympics until the last minute," Lin told reporters.

"This is tough, but also meaningful."

The 36-year-old veteran got the upper hand in the opening minutes on home soil and led 11-6 before Chen came back from behind for a 16-all tie. At the clutch time, Lin withstood the challenge from the Rio Olympic champion, finishing the first game in 21-19.

However, Chen, who is six-years younger than Lin, rallied to play aggressive backcourt shots and controlled the rest of the games, clinching the victory in one hour and 22 minutes.

"Both sides were very concentrated in the match. I did a better job than our last meeting in France," said Lin, who was beaten by Chen in straight sets at the French Open last month.

"(But) In games two and three, I was not in a stable mind when trailing behind, and made too many unforced errors. Despite the loss, I will still carry on and try my best in the next game," he added.

In the second round, Chen Long will take on Lu Guangzu, who got past Huang Yixiang 21-17, 21-18 in another Chinese Derby.