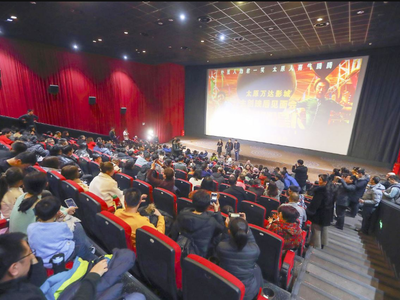 The 10th Beijing International Film Festival (BIFF), which is scheduled for next April, welcomed more entertainment industry leaders and creatives from all over the world, including the United States, said a Chinese organizer.

As one of the world's most prominent film festivals, BIFF would serve as an international venue for different cultures around the globe to communicate, Li Xiaohang, head of the liaison & reception department of the BIFF, said at a promotion event held Saturday in Los Angeles.

He said the BIFF will not only offer a cinematic feast for local movie lovers hoping to see great works on the big screen, but will also build up a platform for filmmakers and actors from all around the world to show their products, exchange views and do business.

"As China's box office has expanded exponentially over the past decade and became one of the biggest markets in the world, the festival will provide a high-profile forum for the interaction between the Chinese and the international film industries," he told Xinhua.

Jeff Rector, president and program director of the Burbank International Film Festival, told attendees from the podium that, "We are here to share artistic ideas and ideals, to promote and share the love of film and the filmmaking process, and to screen, celebrate and honor the films and the filmmakers that create them."

Rector said he would join next year's BIFF with other prominent U.S. filmmakers and actors, like Paul Sloan, Joe Cortese and writer and producer Nick Vallelonga, who won Academy Award for his drama "Green book."

"Over the last couple of years, I've seen wonderful movies come out of China. When they told me what a huge hit 'Green Book' was in China, too, I was delighted. It has a universal message," said Vallelonga, who told Xinhua he looks forward to meeting Chinese audience in BIFF.