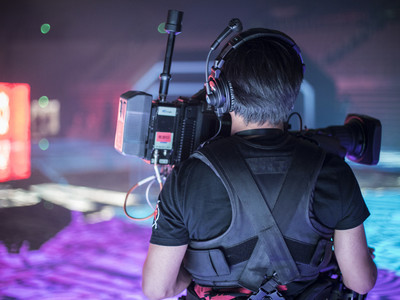 Digital Hollywood (DH) wrapped its famed 3-day conference on Friday at the Skirball Center in Los Angeles, including a special panel on film production in China.

Founded by Victor Harwood in 1993 and now past its quarter century mark, DH is one of the most important entertainment trade conferences in the United States, pulling in over 15,000 top executives each year from the film, television, music, eSports, home video, gaming, cable, telecommunications, and online industries.

"This is a 'must attend' event if you want stay current on what's new in tech and entertainment," Marc Karzen, Founder/CEO of RelishMix, a leading entertainment industry data analysis company that works with the Hollywood Big 6 studios, told Xinhua

The panel explored some of the challenges and benefits of China-U.S. co-production today and what's happening with China's own booming productions.

According to the latest data released at the Asian Society's 2019 Entertainment Summit last week, for the first time, the China and Asia Pacific region's 2018 combined box office total of 16.7 billion U.S. dollar is now the largest regional box office in the world, representing 40.6 percent of the global cume.

Michael Ellis, president of the Asia-Pacific Region for the U.S. Motion Picture Association, revealed that the latest industry data showed the film and television sector was responsible for contributing 48.4 billion U.S. dollars to China's economy and creating 4.7 million jobs.

"China is a very important player now," Lora Chen told Xinhua. Chen is a Chinese entertainment specialist who joined the DH's China panel, and the president of iQica, a Los Angeles based Film Production and Service Corporation.

"So it's important to have a China panel at a mainstream Hollywood Conference for worldwide participants to get firsthand information about Film & TV development, production and distribution there," she said.

"It must have been 20 years ago I flew thousands of miles to attend my first DH," reminisced Seth Shapiro, CEO of AlphaNetworks, who now serves as one of DH's expert panelists himself. "It was worth every penny," he smiled.

This year, DH also expanded its topics to do deep dives into trends in holistic education, activating social change, conversations on cannabis, as well as the latest in wellness & food science.

"This is the kind of conference that makes people think," Larry Gerbrandt, industry data expert and principal of Media Valuation Partners, told Xinhua.