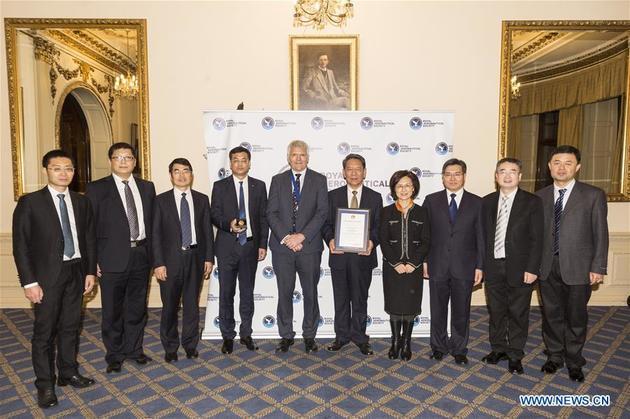 China's Chang'e-4 mission team on Monday received the only Team Gold Medal of the year awarded by Royal Aeronautical Society (RAeS) of the United Kingdom at its annual award ceremony held in London.

The Team Gold Medal, presented to the Chinese delegation led by Academician Wu Weiren, the chief designer of the lunar exploration project of China, is the first award ever that was presented to a team from China by the RAeS since its inception more than 150 years ago.

After the award ceremony, Wu expressed thanks to the RAeS and the award committee, and welcomed more countries and organizations to cooperate with China to jointly contribute to the efforts by mankind to further explore the space and pursue scientific discovery.

The Chang'e-4 probe made the first-ever soft landing on the Von Karman Crater in the South Pole-Aitken Basin on the far side of the moon on Jan. 3, 2019. The complete success of the Chang'e-4 mission created another milestone in the lunar exploration history of the humankind.

Founded in 1866, the RAeS is one of the oldest aeronautical societies in the world. The annual awards are designed to honor outstanding teams and individuals worldwide in the field of aerospace studies and exploration.