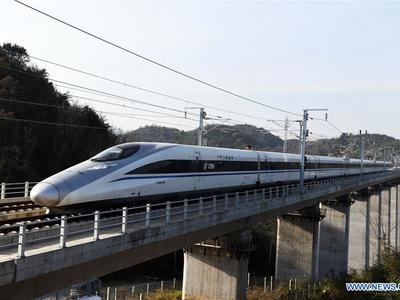 At 8:28 a.m. Monday, a bullet train departed Guiyang, capital of southwest China's Guizhou Province, for a largely mountainous journey that will end in Chengdu, capital of Sichuan Province.

With a design speed of 250 km per hour, the train service marked the launch of 648-km-long Chengdu-Guiyang high-speed rail line, an important part of China's ambitious plan to build a high-speed railway network across the country.

The rail line links Guiyang and Chengdu, two transport hubs in southwest China, providing vast numbers of passengers in the region with a speedy pathway to eastern and southern coastal regions, said Li Yi, a main designer of the railway with China Railway Eryuan Engineering Group.

"The railway is of key significance for tourism, mineral exploration, poverty alleviation, as well as China's strategy to develop the western region," said Li.

Shang Qingli, an art group leader from Dafang County of Guizhou, came early to Guiyang North Train Station for the maiden rail service with 30 members of his group.

"We will vigorously promote Dafang's tourism when we arrive in Chengdu," said Shang, adding that the launch of the railway line will help promote local tourism as well as the Yi ethnic culture.

Due to the mountainous terrain of the region, about 85 percent of the 648-km-long railway tracks were built on elevated bridges or through tunnels.

"In terms of geological conditions, the Chengdu-Guiyang high-speed rail line is one of the most complicated passenger rail projects in China's mountainous regions," said Zheng Tao, a designer with China Railway Eryuan Engineering Group.