Construction of Beijing 2022 venues in Yanqing to complete next year 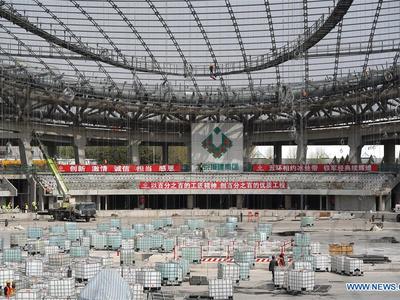 Photo taken on April 8, 2019 shows the construction site of the National Speed Skating Oval, the venue for speed skating events at the 2022 Winter Olympic Games, in Beijing, China. (Xinhua/Ju Huanzong)

The construction of competition venues and auxiliary projects in Yanqing, one of the three venues for the 2022 Beijing Winter Olympics, will be complete by the end of 2020, local authorities said on Wednesday.

Located in the northern suburbs of Beijing, Yanqing with its mountain area accounting for more than 70 percent, will host the Alpine skiing, bobsleigh and luge competitions during the Games.

At present, 25 of the 28 projects including Olympic venues and auxiliary facilities have been under smooth construction, according to Yu Bo, head of Yanqing District of Beijing.

Among them, some racing tracks and related facilities of the National Alpine Skiing Center have been put into use, and the main structure of the National Bobsleigh and Luge Center has been completed, said Yu.

Besides, both Winter Olympic Village and Mountain News Center are being constructed at a steady pace.

To tune up for the Games, Yanqing will host five test events, with the Alpine skiing World Cup being the first, slated for February, 2020.