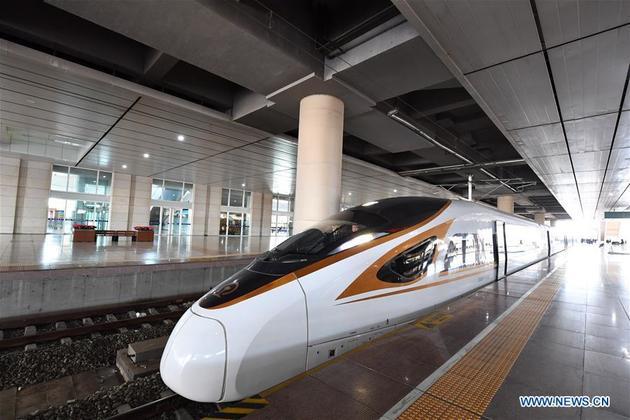 A Fuxing (Rejuvenation) bullet train arrived at Hohhot East Railway Station in the regional capital Hohhot at around 11:54 a.m. after departing from Beijing.

The travel time between Hohhot and Beijing, about 500 km apart, will be shortened to about two hours from over nine hours with the launch of the new service.

"We have innovated more than 30 techniques during the construction process and planted about 700,000 square meters of grass along the railway," said Bai Riqiang, an engineer of the railway's builder.

The new high-speed railway will also link Hohhot and Zhangjiakou, the co-host city of the Beijing 2022 Winter Olympics.

E-ticket services have been launched to enable passengers to use their ID cards or scan QR codes for authentication instead of waiting in line for paper stubs.

"I have been looking forward to the launch of this line. Now I can visit my boyfriend who works in Zhangjiakou or see exhibitions in Beijing in a more convenient way," said Chen Jiaxin who lives in Hohhot.

The length of China's railroad lines in service has exceeded 139,000 km, including 35,000 km of high-speed rail, ranking first in the world.