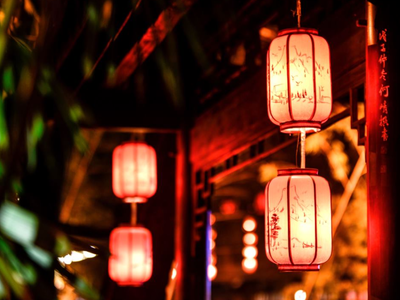 It took a while for Larry Cowley to build his paper lantern craft. It is not the first time for the 10th grader at Wendell Phillips Academy High School on the south side of Chicago to try his hands on Chinese culture.

"One of my friends, she knows a little bit of Chinese that I'd be trying to talk a little bit," Cowley told Xinhua.

"I know about the Great Wall of China; red is a lucky color... and it's like a billion people." The boy gained his first knowledge of China through a culture program when he was at the sixth grade.

By building red paper lantern craft on Monday, Cowley was participating in a similar cultural program with a dozen boys at his school.

"They helped me with that. I know I'm learning new stuff," Cowley said. The boy is most curious about the Great Wall. "I always wanted to see it. I wanna know how long it takes for a person to walk all the way through, I doubt somebody can do that."

At the Monday event, which was jointly organized by China General Chamber of Commerce Chicago (CGCC Chicago) and Youth Guidance, CGCC Chicago brought two books to the school students, a pop-up book about Chinese New Year and a book explaining the auspicious patterns in China.

The event is an opportunity to know more about China. "It makes me intrigued about the Chinese lunar year. I'm actually enjoying the activity," Lewis Patyk, a 12-year grade student of the school, told Xinhua. "I think it's very creative."

Patyk attended a Chinese New Year festival when he was young. "It was amazing. It was so colorful, so creative. It was like if you blink your eye (you) can miss something."

"I love the culture, the food. I just love everything about China," the boy stressed.

"I was thinking about going to China. I want to see what China is actually like, actually experience the culture. I really wanna experience it for myself."

Rebecca Langan, director of external affairs of Youth Guidance, a counseling and a violence prevention program in Chicago committed to school-based programs that enable children to overcome obstacles, focus on education and ultimately succeed in school and in life since 1924, hailed the event as "an opportunity to share cultural dialogue, to learn more about the Chinese culture and to give the students an opportunity to hear from people that look different from them that are different in many ways, but still human."

Addressing the event on behalf of CGCC Chicago, Daniel Li, manager of Wanxiang America Corporation, talked of Wanxiang America's sponsorship of U.S. high school students to study in China in summer programs, saying CGCC encourages all its members to do so.

"We believe people-to-people exchange is the foundation for nation-to-nation relationship. We get to know each other, then we build a trust, we avoid the miscommunication," he said.

Wanxiang America is a member of CGCC Chicago, which represents more than 200 Chinese businesses in nine states in U.S. Midwest.