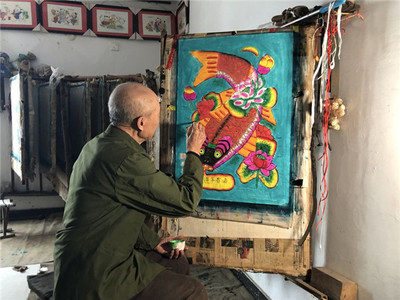 In a workshop around 20 km from downtown Tianjin, 85-year-old Wang Xueqin takes out a woodblock and brushes ink on the board before he places rice paper onto it and rubs the surface with a special tool.

The outline of a picture featuring a big fish in a lotus pond shows up.

With various types of brushes and hundreds of pigments, Wang then paints the fish body with red, its fat head with black and pink, eyes and tail with yellow for three times. "In this way, colors become even brighter and not easy to fade," he said.

Wang, an inheritor of the Yangliuqing Woodblock Printing in north China's Tianjin Municipality, was one of the few artists dedicated to fish paintings which were traditionally hung on people's walls beside the water vats to express good wishes for the Chinese Lunar New Year.

Yangliuqing Woodblock Printing was one of the most popular forms of New Year decorations in China, which flourished in Tianjin and the surrounding areas during a period between the late Ming Dynasty (1368-1644) and the early Qing Dynasty (1644-1911).

In its heyday, more than 300 workshops created the artwork in the old canal-side market town of Yangliuqing in Tianjin. The canal helped transport the paintings to other places, boosting local tourism and the economy.

"The printings contain abundant themes and contents. Fish painting for water vat, featuring bright colors, was one of the most traditional types of Yangliuqing Woodblock Printing," Wang said, adding that it was popular among the common families.

Wang witnessed the ups and downs of this traditional Chinese folk art.

He started making a living by selling the woodblock printings when he was a teenager.

"Those families who had water vats usually bought one picture for a good omen," he said. "I walked through the streets with my father to advertise these pictures. I could earn two (around 28 U.S. cents) to three yuan a day and eat some dumplings, a delicacy at that time."

His heyday came after the reform and opening up in the late 1970s. Every day, he carried rolls of printings and rode a bike to the bazaars in the downtown areas. "I sold about 5,000 pieces at most in a year."

However, the artwork has been gradually losing ground due to reasons including the changing modern function of the printing, a shortage of qualified successors and people's diversified options to furnish houses.

"The traditional artwork should redefine itself under the influence of multi-culture and shifting modern aesthetic standards," said Luo Shuwei, a historian and researcher with the Tianjin Academy of Social Sciences.

Now the Yangliuqing Woodblock Printing has become an art and is not unique to the Chinese Lunar New Year. Many collectors from nearby Beijing and Hebei Province often purchase the paintings from Wang.

Wang has six apprentices. What makes him excited is that his daughter is willing to pick up the baton to pass down the craftsmanship.

"The job is tedious and tough, with a humble income," Wang said. But he is trying to revive the age-old woodblock printing with carving chisels and woodcut knives on his hands. He added some new elements in the painting and engraved six new woodblocks last year.

"Few people use water vats to store water now as they have better living conditions. However, I cannot let this art disappear either," Wang said.