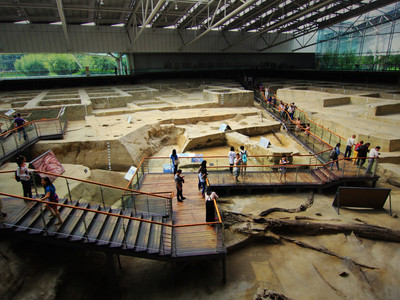 China has released its top 10 archaeological discoveries for 2019, according to the National Cultural Heritage Administration (NCHA).

The findings, selected from a shortlist of 20 archaeological discoveries in 14 provincial-level regions, were announced after a final round of presentations, appraisal and voting held live online for the first time amid regular epidemic control efforts.

The following is the list made public Tuesday by the NCHA:

1. Archaeologists unearthed a large number of relics including stone products, animal fossils and bone fossils from a cave site dating back to the Paleolithic Age in northwest China's Shaanxi Province. Experts say the Jiege Cave which preserves human fossils and rich cultural remains from 100,000 to 15,000 years ago provides important archaeological evidence for the hypothesis that early modern humans in China and even in East Asia evolved from the local ancient population.

2. In northeastern province of Heilongjiang, archeologists have excavated a number of tombs and unearthed a trove of cultural relics including jade, stoneware and pottery, dating back around 9,000 years, at a Neolithic stone burial site by the side of a river on the border between China and Russia.

3. Excavation work has been carried out at an imperial town that is the core part of a 4,300-year-old city ruin in Shenmu City, northern Shaanxi. Pieces of pottery typical of the late Longshan Culture, a late Neolithic civilization in the middle and lower reaches of the Yellow River, were unearthed. With an area of 4 million square meters, the site is the largest Neolithic city ever discovered in China and a valuable asset for research on the early civilization of northern China.

4. The Pingliangtai ruins are the regional center of the Longshan Culture and also believed to have the earliest and most complete drainage system and the earliest wheel ruts in China. Multiple cultural relics including jade wares and pottery were unearthed at the site in Henan Province.

5. A copper smelting site in Xiwubi Village in north China's Shanxi Province is one of the earliest of its kind in the Central Plains. The finding has provided direct evidence for research on early copper smelting technology and production methods and helped to further complete the picture of copper manufacturing in China.

6. An ancient jade mining site located about 68 km to the southeast of Dunhuang in northwestern province of Gansu is the earliest tremolite jade mine ever discovered in China. The site, covering an area of 3 million square meters, shows the history of mining and utilization of tremolite jade in that region dating back to 3,700 years ago.

7. Dating back to the Spring and Autumn Period (770 B.C.-476 B.C.), a group of graves that belonged to the nobility of the Zeng State were found in central China's Hubei Province. More than 50 graves and three horse pits have been excavated at the site, offering more clues to the history of the Zeng State.

8. The discovery of an ancient site in northwest China's Xinjiang Uygur Autonomous Region provided sound evidence of the governance of the Han Dynasty (206 B.C.-220 A.D.) and showcased the interwoven connection between the ethnic culture in Xinjiang and the culture of the Central Plains.

9. Archaeologists found a mural-decorated tomb dating back to the Tibetan Tubo Kingdom that existed more than 1,000 years ago in northwest China's Qinghai Province. The tomb is the first of its kind found on the Qinghai-Tibet Plateau, with mural painting containing features of both Tang Dynasty (618 A.D.-907 A.D.) painting and the nomadic culture. The discovery is of great value for research on cultural communication along the ancient Silk Road.

10. Symbolized as the epitome of the development of China's underwater archaeology, the discovery and excavation of the Nanhai No. 1, a shipwreck dating back to the Song Dynasty (960 A.D.-1279 A.D.), sheds light on the prosperous maritime trade during that period and provides abundant evidence for research into the history of shipbuilding, ceramics, shipping and other aspects of ancient China and the whole of East and Southeast Asia.

The selection of China's top 10 archaeological findings has been held every year since 1990.