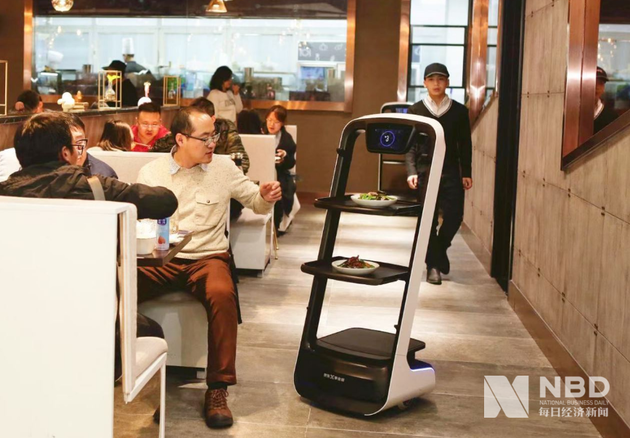 Inside an office building in Shanghai's Changning District, three robotic arms work simultaneously to cook, package, and serve food they make behind glass curtains. After scanning a QR code to place an order and pay, customers get freshly-made meals.

The special "kitchen" with no human chefs appeared to have stirred much interest among locals in the financial hub of China.

It is an unmanned bento store developed by Xi Xiang, a local catering company. As a mechanical design engineer of this company, Zhao Jun's daily work is to "talk" with the machines.

"After the chef develops a new dish, I will convert the chef's cooking process into a machine language," Zhao said, adding that after setting up everything, the robots are able to produce dishes that are comparable to those made by a chef.

"Sometimes we are able to turn the chef's new recipe into reality within a day," Zhao said.

A graduate of the Material Forming and Control Engineering major, Zhao also enjoys cooking. He said he did not expect the two seemingly unrelated things could be integrated as a job.

"The most rewarding moment for me is seeing that after designing, assembling and debugging, the robots can make dishes comparable to a chef's craftsmanship," Zhao said.

Liu Yunxi, founder of Xi Xiang, said that the "unmanned economy" does not necessarily mean the loss of jobs.

Established in 2013, Xi Xiang is a service provider of integrated solutions for unmanned kitchens. The unmanned canteens and food carts developed by this company will be launched in the middle of this year.

Although there is no man in the kitchen, the robots still need experienced chefs to be their "mentors." Liu said the chefs had helped develop more than 1,000 kinds of recipes for robots.

Huang Li, who works as a food research and development engineer in Xi Xiang, can develop more than 10 dishes per month by using seasonal materials and teach the cooking robots.

The epidemic is both a crisis and an opportunity for Xi Xiang. Liu said that although their catering orders have been affected to some extent, they have recently received many catering companies' intent to seek cooperation with their unmanned kitchens.

Xi Xiang is not the only company jumping on the robot bandwagon.

Cofe Plus, a robot coffee bar made by Hi-dolphin Robotics Co., Ltd., a Shanghai technology company, also explored opportunities during the epidemic. Inside a 2.5-square-meter kiosk, a robotic arm is able to brew a cup of hot coffee within 30 seconds.

Han Feizi, general manager of Hi-dolphin Robotics, said that in order to make a decent cup of coffee, they have made a lot of research including how to enable the robotic arm to accurately cover the lid of a coffee cup.

At the end of 2019, Xi Xiang's unmanned kitchen received a license for catering business, the first of its kind in Shanghai.

Liu said the unmanned economy will create greater career choices. In the future, the company plans to invite more chefs to contribute their recipes.