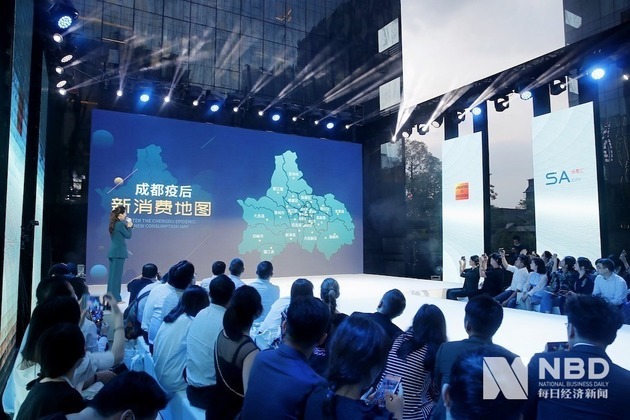 May 29 (NBD) – Southwest China's Chengdu unveiled 100 new scenes and 100 new products centering on consuming activities on Thursday, as part of the city's effort to build itself into an international hub for consumers, offering opportunities to global investors to participate in its development.

These new forms of consumption are extensions from 8 bigger categories that cover a wide range of city life, including shopping, sports, culture, and technology. Places involved including the city's landmark shopping district in the Chunxi Road neighborhood, the heritage building block Kuanzhai Alley, the newly finished open air music park, as well as the city's iconic panda breeding base.

Roadshows were held to elaborate on the 8 new categories. Local officials, including the director of the publicity department of Jinjiang District and deputy district mayor of Shuangliu District, explained plans to upgrade Chunxi Road blocks and the airport area, respectively.

Such publicity efforts by officials have become popular in China to offset the impact of the COVID-19 outbreak and boost regional economy.

The list of new scenes and products are integrated in a digital map, which was also published at the event. The multimedia map, first of its kind in China since the outbreak of COVID-19, aims to improve the exposure of the listed scenes and products to potential investors and partners.

Moreover, an action plan to boost spending with these new consumption forms was announced. According to the plan, every year, Chengdu aims to attract 200 brands to set up their first China store in the city, and sign more than 40 consumption projects that are worth over 100 million yuan each, among other things.

The goal is to have over 50 influential new consumption scenes that have both Chengdu characteristics and international style by 2022.

To achieve the goal, Chengdu pledged in March to continuously publish a total of 1,000 new scenes and 1,000 new products such as those mentioned above to the world, creating opportunities for enterprises, as well as more options of good life for millions of residents in the city.