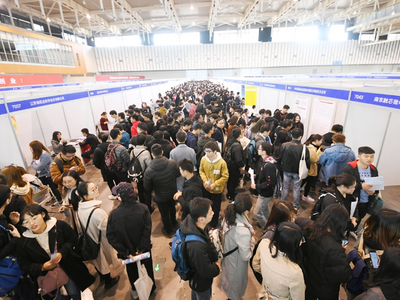 The figure went down 0.1 percentage points from the previous month, according to the National Bureau of Statistics (NBS).

A total of 4.6 million new urban jobs were created in the first five months of 2020, down 1.37 million compared with the same period of last year.

The surveyed unemployment rate among those aged between 25 and 59, the majority of the labor market, stood at 5.4 percent in May, down 0.1 percentage points from April.

Meanwhile, the surveyed rate in 31 major cities was 5.9 percent last month, up 0.1 percentage points from April, according to the NBS.

The surveyed urban unemployment rate is calculated based on the number of unemployed people who have participated in the employment survey in urban areas, including migrant workers in cities.

Fu Linghui, a spokesperson for the NBS, said the reasons for a drop in the unemployment rate were an improving economy, implementation of supportive policies, and more employees returning to their workplaces.

The recovery in production demand has laid the ground for job market expansion and stability, Fu said, citing positive trend in other May economic indicators including the value-added industrial output and service sector production.

He, however, acknowledged that the pressure on the employment situation cannot be overlooked, which stems from total employment pressure, underemployment, and the employment of key groups such as college graduates, which is expected to reach a historical high of 8.74 million this year.

China will give priority to stabilizing employment and ensuring living standards this year, aiming to add over 9 million new urban jobs and keep the surveyed urban unemployment rate at around 6 percent, according to the government work report.