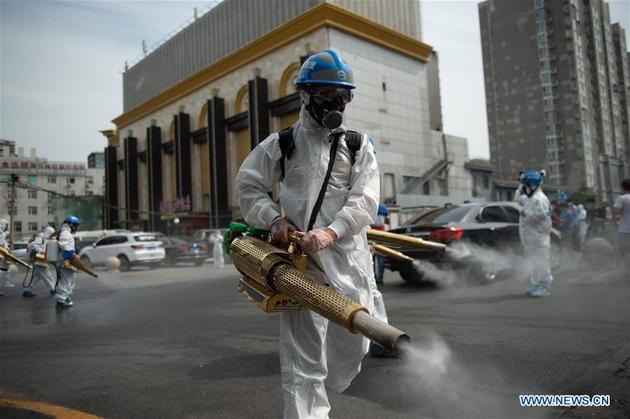 Classes are moved online for primary and middle school students, and class resumption of college students will be suspended, said Chen Bei, deputy secretary-general of the Beijing municipal government, at a press conference.

The cluster outbreak, which has affected nine districts and 28 neighborhoods, was initially believed to be caused by human-to-human transmission or contamination of articles and environment, Chen said.

She stressed that there had been confirmed secondary infections among close contacts.

Beijing has listed 27 neighborhoods as medium-risk zones, and one high-risk neighborhood.

Chen said those from the medium- and high-risk neighborhoods and relevant people from the Xinfadi farm produce market, where most of the new confirmed cases are related, are not allowed to leave Beijing.

Other people who need to leave the city must have negative results of the nucleic acid test taken within seven days, Chen said.

According to the official, people entering the city from overseas will be put under medical observation at designated places, and undergo nucleic acid tests.

Beijing will strictly enforce epidemic prevention measures in farmers' markets, restaurants, and canteens, and strengthen monitoring. Employees in those places must wear masks and gloves.

The capital city demands certain team sports such as basketball, football and volleyball, to come to a halt. Venues of cultural entertainment, swimming pools and gyms will remain closed.