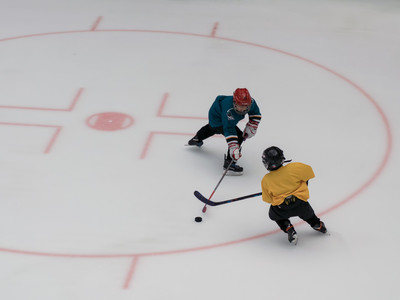 The COVID-19 outbreak has affected the sports industry worldwide to varying degrees. However, in the city of Qiqihar in Northeast China's Heilongjiang province, the internet provides new chances for the industry to develop.

Qiqihar is famous for ice hockey in China, with bright prospects for the development of winter sports.

"Hello everyone, I am Zhang Yanchang, deputy director of the Qiqihar Sports Bureau. Welcome everyone to the live broadcast room," Zhang made the opening remarks on a business invitation meeting on a short video platform on the evening of April 27.

Ten guests, including officials from the Sports Bureau, experts in the sports industry, and entrepreneurs became anchors for the virtual meeting.

They each introduced their part to the viewers, either government policies, cooperation intentions, or advantages of their products. Qiqihar Sports Bureau signed project contracts with some enterprises during the live broadcast.

In recent years, Qiqihar City has vigorously developed the sports industry through the promotion of ice hockey and other sports. More and more local people participate in ice and snow sports, and there are more and more sports competitions in Qiqihar.

"We hope to find opportunities for cooperation through live broadcasts to mitigate the impact of the COVID-19 pandemic on the sports industry," Qiqihar Sports Bureau Director Tang Chaolong said.

The director also served as a salesman on the short video platform and recommended the products of Qiqihar sports manufacturing enterprises to viewers.

In the past few years, Qiqihar has hosted hundreds of international and domestic ice hockey tournaments every year. This summer's games are a little special.

On June 10, the Qiqihar men's ice hockey team, the champion of the Chinese National Winter Games, had an intra-team match behind closed doors. The game was broadcast live through a short video platform.

To meet the needs of more fans, the organizer then held two more games, and the total number of online views in the three games exceeded 70,000.

"Next, we will try to make the live broadcast a common practice during this special time," Tang said.