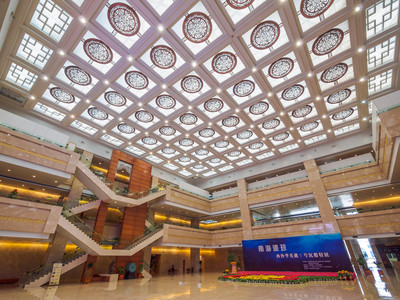 In her worn white coat and gloves, Ma Li sits at her worktable laden with a lamp, pottery relics and pairs of tweezers.

With her left hand on a piece of grey pottery granary vessel, a burial relic dating back to the Eastern Han Dynasty (25-220), Ma scrapes the dirt on the piece with an art knife in her right hand in an underground studio.

The original texture was obscured after nearly 2,000 years of lying dormant. As the dirt was cleaned, the texture reappeared.

Ma, 42, is one of the 12 cultural relics repairers at Ningxia Museum in northwest China's Ningxia Hui Autonomous Region.

Ma majored in art in a vocational school, and her first job was a guide at the Guyuan Museum of Ningxia.

After graduating from Ningxia University in 2005, she was later drawn to repairing relics during a training program on the restoration of pottery and metal relics, which thereafter became her area of specialization at Ningxia Museum.

According to Ma, cultural relics repairing is technically demanding work, as it requires multi-disciplinary knowledge of fields such as chemistry, physics and fine arts, among others.

"Sanitizing the pieces is just the first step. Next, the pieces should be assembled and formed into a whole. Then, the parts will be supplemented with plaster. Only through these strict procedures can I complete the restoration," said Ma.

Relics restoration is also time-consuming as restoring a single relic can take from a few months to years, and for her efforts, she is paid more than 4,000 yuan (about 570 U.S. dollars) per month.

"The restoration of cultural relics takes a long time, testing my patience sometimes. Without love for the industry, maybe I couldn't keep going," she said, adding that she feels a sense of achievement after her work is finished.

Over the past 15 years, she has restored more than 1,000 cultural relics, some of which are now on display in museums in Ningxia.

Ma said that through restoration she can become familiar with the cultures and states of societies from different dynasties and periods.

"For repairers, the most important role of cultural relics restoration is to keep original artifacts intact and prolong the 'life span' of each relic, thus facilitating scientific research of the relics," she said.

Chen Zhiwei, 31, learned about the identification of cultural relics and joined the restoration team of Ningxia Museum to restore calligraphy and paintings after retiring from the military.

Chen recalled that his major was unpopular so most of his classmates have changed their careers. "My passion for cultural relics and sense of accomplishment are the reasons why I stay."

"I love the repair work and look forward to seeing new experts join us to bring new vigor to the broken relics," Ma said.