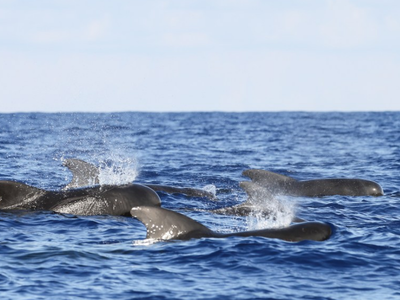 Chinese researchers have spotted 11 whale species in the South China Sea during a deep-sea scientific expedition, the Chinese Academy of Sciences said Tuesday.

The 21-day expedition wrapped up Tuesday in Sanya, Hainan Province, having covered over 3,000 km. It was launched to conduct research on the diversity, population levels and distribution patterns of whales in Xisha Islands and Zhongsha Islands in the South China Sea. A similar expedition to study whales was launched in 2019.

Researchers on this year's expedition spotted four whale species that were not seen last year: the pygmy killer whale, the false killer whale, Long-snouted spinner dolphin and the melon-headed whale.

According to researchers, historical records show that over 30 whalespecies have been recorded in the South China Sea, indicating that the area boasts the country's greatest diversity of whale species.