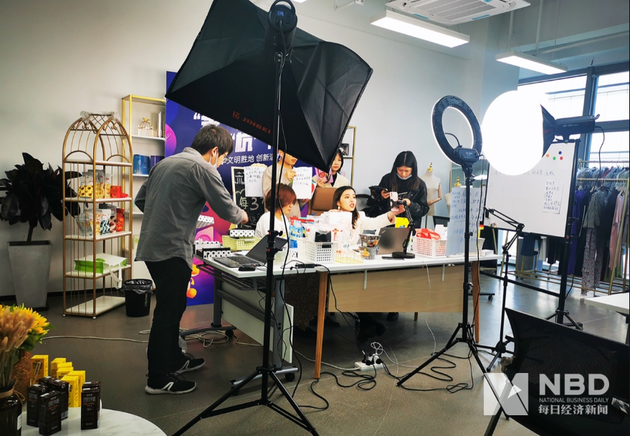 At 9 pm, Tan Yalan talked to her phone screen, touting a men's T-shirt she was wearing during a livestream.

"Look at this one. This is 100 percent cotton. It's well-tailored and super comfortable. You'll definitely love the way you look in this durable classic," said Tan, 21.

While talking, Tan vanished into a portable fitting room in the 10-square-meter studio. After a few seconds she reappeared in a new style T-shirt.

Tan is among the sprawling groups of people selling shirts and dresses via livestreaming in Shishi, a garment manufacturing hub in East China's Fujian province.

Livestreaming not only stands out as an effective way to boost sales amid the COVID-19 pandemic, but also opens up more job opportunities for college graduates caught in the grim job market due to the tanked economy worldwide.

By March, China had 560 million livestream users, 163 million more than that in December 2018, according to a report by the China Internet Network Information Center in April.

As a former student majoring in marketing, Tan graduated this year from Chengdu in Southwest China's Sichuan province. She came to the coastal city of Shishi in November to complete her internship as required by the college.

"I took to livestreaming as it was related to my major," Tan says, adding that she came to Shishi because of its complete industrial chain, as well as booming livestreaming sales businesses.

Starting from scratch, she became an anchor assistant at first and then a livestreaming director, before sitting in front of the screen for the first time five months later.

To cushion the impact of the epidemic, the local government of Shishi pinned its hope on e-commerce, and encouraged factories and trading companies to sell their products via livestreaming.

The city held a month-long livestreaming festival starting in late February, reaping in 1.08 billion yuan ($154.9 million) in sales revenue. Thousands of youngsters from all over the country worked around the clock to pursue their dreams as anchors, contributing to online sales during the festival.

In April, Tan opened her own online store to sell men's T-shirts on the video-sharing platform Douyin, also known as TikTok.

Every afternoon, she walks downstairs to warehouses to select products and prepare for the evening show. She usually starts the show before 6 am or after midnight when there are fewer competitors and therefore more viewers.

"If you want to excel in the industry, you have to be both a morning bird and a night owl," Tan says.

As a fast learner, Tan has acquired some tips. "Your presentation should be eye-catching, and the anchor should remain energetic all through the show," she says.

Over the past three months, her sales revenue amounted to 200,000 yuan. With 5,000 followers currently, she earns 20,000 yuan a month, much more than the average for college graduates in the country.

With her career on the right track, Tan began to offer training sessions to share her knowledge and skills with people yearning to jump on the livestreaming bandwagon.

"As long as you are persistent, work hard, and are always ready to learn, you will be successful one day," Tan says.