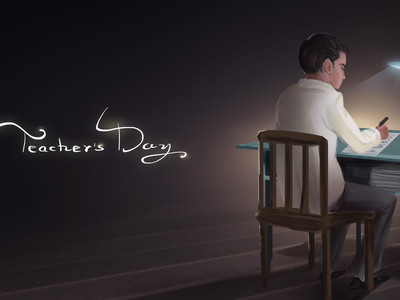 Dong Zhuwen, a 63-year-old rural teacher, starts his day early by shopping at a grocery store to prepare lunches for his students, and on the way to school, he usually picks up several students in his class.

Dong has been teaching and taking care of his students for 43 years.

Unlike his primary school peers in urban areas, Dong only teaches pupils in the first and second grades as village schools in the deep mountains of central China's Hunan Province are usually built to meet the basic educational needs of neighborhoods that are sparsely populated.

After completing their time at village schools, students will continue their studies at schools in town.

This year, Dong is in charge of all the courses of 15 students in a primary school in the village of Chagan in Chaling County.

Dong said most of the students enrolled each year in the school are children left behind by their parents who work in big cities seeking better-paid jobs.

"I firmly believe that no matter how poor a family is, they must invest in their children's education. Going to school is their best path out of the mountains," he said.

Dong has taught thousands of students, and whenever a student shares with him good news such as their being admitted by a high school or university, he feels a great sense of achievement.

"There is nothing happier for a teacher," Dong said.

In 1977, he graduated from high school and started his career as a Chinese teacher. He adapted quickly to the job, and the academic performance of his students is usually the best in the town.

However, for students living in the mountainous areas that lack access to transportation, it is not easy to complete their schooling.

"In the late 1980s when students had to pay tuition fees for primary education, the dropout rate in the villages was high because students and their parents could hardly afford the costs," Dong said. He would offer the dropouts financial support to ensure they went to school.

Dong has always been concerned about left-behind children in the villages. When he reached the age of retirement in 2018, he decided to stay on to dedicate himself to the career he loved so much.

In Hunan Province, more and more retired teachers like Dong have returned to classrooms thanks to a project that invites them to continue their teaching career.

Hunan plans to recruit about 350 retired teachers who have rich experience in education for the 2021 academic year.

In Chaling County where Dong works and lives, there are 2,280 rural teachers. The county's education authority has issued a spate of policies, such as improving their salary and offering benefits, to encourage teachers to base themselves in the countryside.

Dong hopes the villages will be able to attract more young teachers in the future. "Although we don't have too many students, they still have the right to be equally educated. Younger teachers can not only teach students plenty of subjects such as music and fine arts but also help them better learn about the outside world."

"Teaching is my hobby and mission. As an older teacher, there is no such thing as retirement," Dong said.