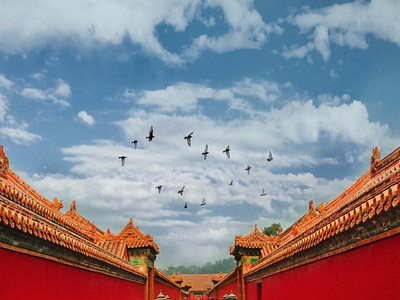 A grand exhibition marking the 600th anniversary of the construction of the Forbidden City in Beijing was launched on Thursday.

In total, 450 cultural relics and historical materials, including photographs, are on display at the exhibition, revealing the weal and woe of the imperial courts over the course of six centuries.

Visitors will be introduced to the charms of classical Chinese architecture, traditional construction engineering skills, various principles of traditional Chinese philosophy, and catch a glimpse of the palace scenery during the four seasons.

The exhibition, titled "Everlasting Splendor: Six Centuries at the Forbidden City," will run until Nov. 15 at the Meridian Gate, according to the museum.

Constructed from 1406 to 1420, the Forbidden City measures 961 meters from north to south and 753 meters from east to west, spanning an area of around 720,000 square meters. Featuring red walls and yellow glazed roof tiles, It represents the culmination of traditional Chinese palatial architecture, influencing cultural and architectural developments in East Asia and surrounding areas.

The Palace Museum reopened on May 1 after a three-month closure due to the COVID-19 epidemic. It raised the cap on daily arrivals to 12,000 from July 28.

Visitors still need to make online reservations, have their body temperatures checked before entering, wear face masks, and practice social distancing in the exhibition halls, according to the museum.