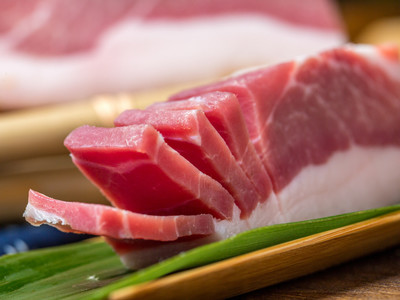 China's pork prices remain high, but industry insiders and government officials say they are unlikely to rise further, thanks to rising domestic supplies and increased imports.

In August, the country's pork prices rose by 52.6 percent year on year, but the rate of growth was down by 33.1 percentage points from July, a considerable moderation.

Multiple factors, including an outbreak of African swine fever and the lag effect of the last market cycle, have contributed to months of spikes in pork prices.

The Chinese government has rolled out policies to improve supply and stabilize prices. The authorities have released a large amount of pork into the market from central reserves. At the same time, a series of accommodative policies have been implemented to support pig production.

Pig farmers and companies have flocked back into the business to seek high-flying profits amid the government's supportive policies.

"As the current market situation is good, our company has increased investment in breeding," said Gao Feng, marketing director of Huazheng Agriculture and Animal Husbandry Development Co., Ltd. in northeast China's Jilin Province. "With the help of the local government, we also started to expand business in the entire industrial chain to help resist risks in the future."

Since the beginning of this year, more than 9,000 new pig farms have come into production, and more than 11,200 large-scale pig farms have been re-opened, said Kong Liang, deputy director of the Animal Husbandry and Veterinary Bureau of the Ministry of Agriculture and Rural Affairs.

In August, China's pig population rose for a seventh straight month, up 31.3 percent year on year. Sow inventory increased for 11 consecutive months, up 37 percent from a year earlier, said an official with the Ministry of Agriculture and Rural Affairs.

China's pork demand and supply will become more balanced in the fourth quarter, as pig production continues to recover, according to the agricultural official.

"Thousands of meat products from abroad are free to taste here. As a 'foodie,' it's almost party time for me," said Wang Kaiwen, a Qingdao resident who attended the exhibition.

Mireille Bossy, deputy counselor for agricultural affairs of the French Embassy in China, also took part in the event. "The meat trade cooperation between China and France has great potential," she told Xinhua. "This exhibition provides an opportunity for French companies to design meat products that satisfy the taste preferences of Chinese consumers."

"Last year, China became Ireland's largest market for primal pork, setting a record of 90,000 tonnes of pork trade," said Conor O'Sullivan, the China manager of Bord Bia, the Irish Food Board. "Given the market opportunities and commercial priority for European and Irish exporters, approximately 80 percent of a large campaign aiming to facilitate the supplies of premium European pork and poultry campaign funds will be focused on the Chinese market."

China, with a population of 1.4 billion, is the world's largest pork producer and consumer, where pork accounts for 62.7 percent of residents' meat consumption.

To meet the demand, Chinese authorities have also issued export licenses for a number of U.S. meat companies. The trade-friendly measures have boosted the confidence of American farmers to keep investing in the meat industry.

According to the U.S. Meat Export Federation, the Chinese mainland and Hong Kong accounted for 39 percent of U.S. pork exports from January to June this year.