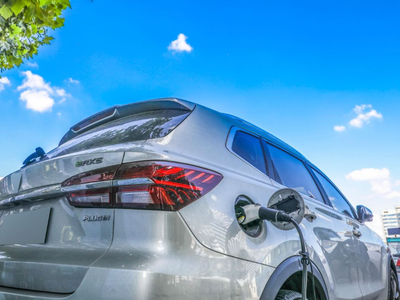 Participants in the event reaffirmed the goal of "raising global market share of NEVs to 50 percent by 2035," a unanimous target set at last year's first session of the WNEVC, and vowed to enhance open, intensive and win-win cooperation, thus creating new momentum for the transformation and upgrading of the automotive industry.

"The breakthroughs and applications of new energy, new materials, artificial intelligence, big data and other new technologies have promoted the transformation and development of the automobile industry in terms of electricity, intelligence and sharing," said Wan Gang, chairman of the China Association for Science and Technology.

Wan, who is also president of WNEVC, made the remarks in his keynote speech at a plenary session at the event, held in Haikou, capital of south China's Hainan Province from Sept. 27 to 30.

China's NEV industry has entered a critical era for complete commercialization and quality development, he said, noting that, according to the WNEVC 2020 consensus, battery electric vehicles are striving to meet the overall requirements of commercialization by 2025.

In her video speech at Monday's plenary session, Inger Andersen, United Nations (UN) under-secretary-general and executive director of the UN Environment Program, said that China has played a leading role in the electrification of vehicles, and global auto manufacturers should increase their investment in e-mobility.

German automaker Volkswagen has announced that it will invest 15 billion euros (about 17.5 billion U.S. dollars) in China alone by the end of 2024, together with its Chinese joint-venture partners, fueling the country's e-mobility push, according to Volkswagen Group China CEO Stephan Wollenstein.

The company is placing 40 super-charging stations in Beijing, Chengdu and Shenzhen, and has plans to build 255 more stations equipped with 1,800 charging poles across 16 Chinese cities by the end of 2020.

Jochen Goller, president and CEO of BMW Group Region China, said the company has established a joint venture with China's Great Wall Motor and broken ground on a new NEV factory in Zhangjiagang, in the eastern province of Jiangsu, which will produce fully electric MINIs for China and the world.

Seiya Nakao, chairman and president of Toyota China's engineering and manufacturing, said that China has advanced pure electric vehicles, and that Toyota hopes to learn more from China and is pleased to cooperate with CATL, BYD and other leading companies in the industry.

China has rolled out a slew of measures to further NEV marketization, such as prolonging subsidies and exemption from purchase tax, promoting NEVs in the emerging rural market, formulating medium and long-term plans for NEVs, and supporting the construction of "new infrastructure," including charging stations.

Wan noted that the quick production and work resumption in China's automotive industry since the outbreak of the COVID-19 epidemic has ensured the stability of the global industrial and supply chains.

The WNEVC president called for cross-sector synergy and win-win cooperation in the global automotive industry to meet challenges and contribute to building a clean and beautiful world, as well as promoting innovative, green and sustainable development.