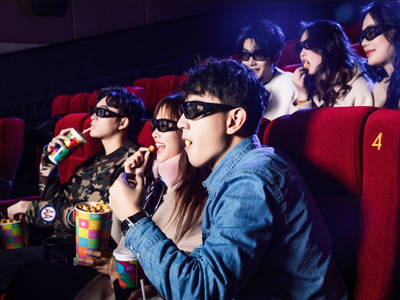 China's box office revenue in the first seven days of the eight-day National Day holiday grew to more than 3.69 billion yuan (about 542 million U.S. dollars), according to the country's film ticketing and data authority.

The domestic comedy feature "My People, My Homeland" led the box office, pocketing almost 1.73 billion yuan as of Wednesday. Released on Oct. 1, the film tells five stories about people's love for their homeland.

"Legend of Deification," an animation film revolving around a mythological figure called Jiang Ziya, came second and grossed over 1.32 billion yuan as of Wednesday.

The third place went to "Leap," a biographical film depicting the multi-generational struggle of the Chinese women's volleyball team to secure glory for the nation. Released in late September, the movie had raked in about 610 million yuan as of Wednesday.

Ming Zhenjiang, head of the China Film Producers' Association, said this year's National Day movie feast better met the demand for watching movies, which was suppressed due to COVID-19 and has boosted confidence for the further strong recovery of the movie market.

The traditional week-long National Day holiday, which starts on Oct. 1, coincided with the Mid-Autumn Festival this year, extending the holiday to eight days.