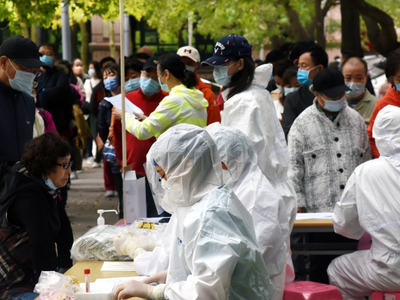 The city of Qingdao in east China's Shandong Province planned to conduct a city-wide nucleic acid testing for COVID-19 after new cases were reported.

Qingdao has completed nucleic acid testing and sampling for more than 1 million people, announced the information office of the municipal government Monday evening at a press conference. No new cases were tested positive so far based on over 310,000 available test results.

The city has designated the Loushanhou Community, where the Qingdao Chest Hospital is located, as a medium-risk area, while the risk levels in the rest part of the city remain unchanged.

Epidemiological investigations show that three asymptomatic cases were associated with the hospital, which has set up independent areas for treating imported cases of COVID-19.

The city expects to complete nucleic acid testing in five districts in three days, while the testing will cover the whole city in five days, according to a notice issued by the municipal health commission, adding that the results will be released in a timely manner.

Starting from 7 a.m. Monday, the residents of a community in the city's Shinan District began to line up at a testing point to receive nucleic acid testing. They were notified to undergo the testing on Sunday evening.

"It took about 20 minutes to wait before getting the testing. It's a responsible move to conduct tests for ourselves and for others, too," said a local resident surnamed Wang.

Qingdao has reported six new confirmed cases and six new asymptomatic cases of COVID-19 since fresh cases emerged in the city over the weekend, said its health commission.

Epidemiological investigations show that the cases were linked with the Qingdao Chest Hospital, which had been used to treat imported COVID-19 patients.