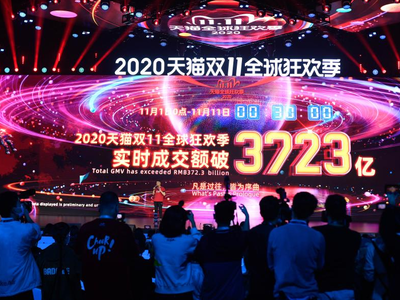 At the shopping peak, 583,000 orders were made in a single second on Tmall, setting a new online shopping record.

To cater to growing demand from Chinese consumers, Tmall launched this year's shopping festival early, with the first discount period running from Nov. 1 to Nov. 3 in addition to the normal full-day sales on Nov. 11.

More than 800 million shoppers, 250,000 brands and 5 million merchants have participated in this year's shopping spree, according to Tmall.

Weng Yi, a researcher with Chinese think tank Cathay Institute for Public Affairs, said this year's Singles' Day shopping spree could serve as a barometer for China's consumption, as the government pursues a "dual circulation" development pattern, where domestic and foreign markets can boost each other, with the domestic market as the mainstay.

"With overseas purchases hampered by the pandemic, the Singles' Day shopping carnival has offered an optimal opportunity for Chinese consumers to buy overseas products, and may significantly boost sales for global brands and merchants," Weng said.

In response to strong domestic demand for quality products, Tmall Global, Alibaba's cross-border e-commerce arm, has imported a huge variety of products from over 100 overseas farms, ranches, and wineries, including 1,000 tonnes of milk from Uruguay, 2.6 million bottles of French wine, and 2 tonnes of cubilose from Malaysia.

About 25,000 overseas businesses from more than 220 countries and regions have participated in this year's shopping spree on Tmall. Many of them seek to revive their sagging businesses amid the pandemic by tapping into the huge Chinese market.

"We have found that an increasing number of overseas brands chose to enter the Chinese market by opening their first store on Tmall Global," said Liu Peng, president of Tmall Import and Export.

Tmall Global has also cooperated with 25 professional quality-control institutes to ensure that all imported goods are traceable all the way to their production and distribution processes.

On e-commerce platform Kaola Global, businessmen from Turkey, Italy and Japan tried to woo Chinese customers through livestreaming sales events, in which many of them promoted their products in Chinese and showed customers live footage of overseas production lines.

ISIK, the largest manufacturer of dried fruit in Turkey, saw year-on-year sales growth of 120 percent from Nov. 1 to 3. With all products selling out within three days, ISIK is rushing to produce more goods to meet the demand of Chinese consumers.

"Kaola Global has helped us tap into the Chinese market and recover quickly amid the COVID-19 pandemic," said Sezgin, a sales executive at ISIK.

"Consumption represents a paving stone in our path to realizing people's aspirations for a better life," said Liu.

"Consumption is currently the largest driving force of the Chinese economy," said Zhong Hongjun, an economist with Shanghai University of Finance and Economics. "Meanwhile, e-commerce companies are acting as stabilizers and boosters as the Chinese economy recovers from the impact of the epidemic."

Driven in part by the epidemic, online retail has witnessed a period of fast growth this year. China's online retail sales reached over 8 trillion yuan (about 1.19 trillion U.S. dollars) in the first three quarters, up 9.7 percent year on year, according to the Ministry of Commerce (MOC).

"The Singles' Day shopping festival is not simply an online shopping event. It is an important part of the internal circulation of the Chinese economy," Zhong added.

The festival has not only prompted e-commerce companies to better adapt to market trends, but also created enormous job opportunities, which could in turn spur consumption, said Zhong.