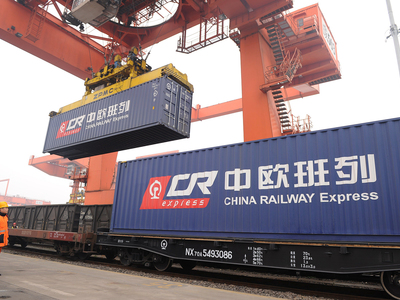 China-Europe freight trains to and from Xi'an, capital of northwest China's Shaanxi Province, made more than 3,400 journeys in the first 11 months of this year, almost double the figure from the same period last year, local authorities said on Tuesday.

The trains carried more than 2.64 million tonnes of goods between January and November, 1.8 times the volume from the same period last year, according to the Xi'an International Trade & Logistics Park.

Both the cargo volume and the number of train journeys in Xi'an ranked first among major cities nationwide.

Xi'an operates 10 China-Europe freight trains each day, with over 3,600 journeys expected by the end of the year, according to Sun Yimin, director of the administrative committee of the Xi'an International Trade & Logistics Park.

Initiated in 2011, the China-Europe cargo rail transport service plays a significant role in the Belt and Road Initiative, boosting trade between China and participating countries. The service remains a reliable transportation channel amid the novel coronavirus pandemic.

Xi'an launched its first China-Europe freight train in 2013. The service currently operates 15 routes linking Xi'an with destinations in Asia and Europe, covering 45 countries and regions along the Belt and Road.