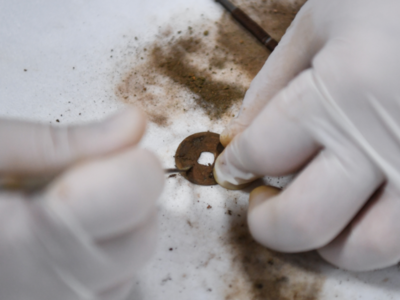 More than 10,000 ancient coins, most of which date back to the Northern Song Dynasty (960-1127), have been found in central China's Hunan Province, according to local authorities.

The coins were unearthed in a cellar beneath a pond in Hualin Village in the city of Ningxiang on Jan. 7. They were discovered as local villagers removed sludge from the pond bottom, according to Sun Bingli, a local cultural relics protection official.

Experts identified most of the coins as having been minted during the Northern Song Dynasty, judging by the inscriptions indicating their date of production. The oldest coins date back to the Tang Dynasty (618-907).

Preliminary investigations by the experts found that the coins were buried in the cellar in the early Southern Song Dynasty (1127-1279).

The coins weigh more than 100 kg in total, Sun said, adding that they have been well preserved, providing valuable materials for the study of local history.