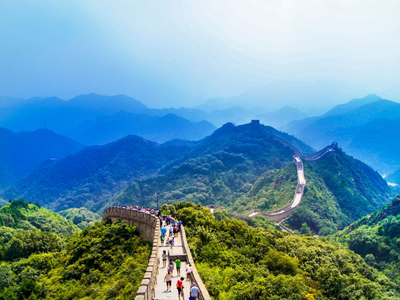 Authorities have enhanced protection for sections of the Great Wall in northwest China's Gansu Province.

In recent years, they have pumped about 600 million yuan (93 million U.S. dollars) of funds into the preservation of the existing wall sections in Gansu, with more than 30 protection projects implemented, said Ma Yuping, with the provincial cultural heritage bureau.

Landmarks stand in key sites, and fences are in place to keep away frequent human activities that cause damage to the Great Wall.

The length of the Great Wall sections in Gansu stands at 3,654 km, the second longest in the country.

Meandering along mountain ridges across northern China, the Great Wall was built between the 3rd century BC and the Ming Dynasty (1368-1644). The existing sections mostly date from the Ming Dynasty, with the Ming Wall measuring over 8,800 km.

It is a UNESCO World Heritage Site, consisting of many interconnected walls, traversing several provinces and cities in China.

Due to human destruction and natural weathering, some parts of the Great Wall have collapsed or been damaged.

Over the years, China has put ever greater effort into protecting the Great Wall, including measures like establishing the Great Wall protection and renovation base and blacklisting visitors who cause damage.