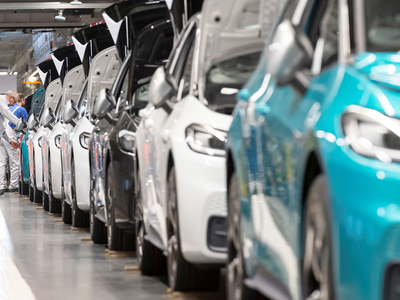 Sentiment of Germany's manufacturing industry "improved noticeably" as the ifo index for export expectations rose from 7.5 points in the previous month to 10.7 points in February, the ifo Institute said on Tuesday.

The ifo export index that reflects German companies' export expectations for the next three months climbed to the highest level since September 2018, according to the monthly ifo survey among 2,300 German manufacturers.

"China's good economic situation and an increase in U.S. production are helping German exporters," said President of the ifo Institute Clemens Fuest in a statement.

China ranked second among Germany's biggest export markets, according to Destatis. Unlike all other major markets, German exports to China were almost unaffected and only decreased by 0.1 percent year-on-year to 95.9 billion euros.

According to the German Electrical and Electronic Manufacturers' Association (ZVEI), China even expanded its position as the German electrical industry's biggest export market last year. With an increase of 6.5 percent to 23.3 billion euros, the Chinese market "developed more dynamically" than before the COVID-19 pandemic.

The chemical industry in Germany and manufacturers of machinery and equipment also expected "significant export growth," the ifo Institute said. Automotive manufacturers in Germany similarly "put a three-month lull behind them and are once again expecting more orders from abroad."

However, Germany's furniture and clothing industries would "still face difficulties" in the international market and companies expected a "significant decline in sales," the ifo Institute said.

The Association of the German Furniture Industry (VDM) said last week that sales of the industry declined by 3.7 percent year-on-year to 17.2 billion euros last year and the domestic market "proved to be significantly more stable for the industry than exports."