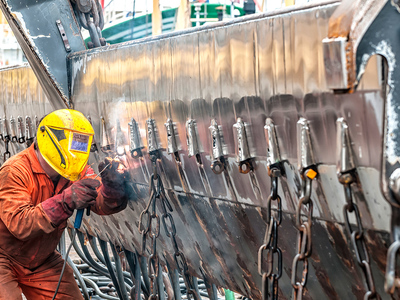 China has maintained its position as the world's largest manufacturing hub for 11 straight years, accounting for nearly 30 percent of the global manufacturing output, according to the Ministry of Industry and Information Technology (MIIT).

In the past five years, the value-added industrial output in China has increased from 23.5 trillion yuan (about 3.63 trillion U.S. dollars) to 31.3 trillion yuan, Xiao Yaqing, minister of MIIT, said Monday.

During the 13th Five-Year Plan (2016-2020) period, the average growth rate of the value-added output from China's high-tech manufacturing sector reached 10.4 percent, up 4.9 percentage points from that of the overall industrial output, MIIT data showed.

The information transmission and software and information technology service industries have seen remarkable progress during the period. Their value-added industrial output surged from 1.8 trillion yuan to 3.8 trillion yuan with the proportion in gross domestic product growing from 2.5 percent to 3.7 percent, Xiao added.

By the end of 2020, household penetration of fixed broadband in China reached 96 percent, while the mobile broadband penetration rate came in at 108 percent, the data showed.

In terms of 5G development, the country has built a total of 718,000 5G base stations by the end of last year, with the number of mobile terminals connected to the network exceeding 200 million, according to the MIIT.