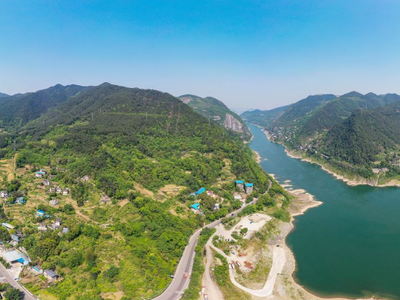 Southwest China's Chongqing Municipality has issued a plan to further integrate cultural elements with the scenic landscape of the core Three Gorges area on the Yangtze River.

The scope of the plan includes Chongqing's Wanzhou District, Zhongxian County and Shizhu Tujia Autonomous County in the center of the Three Gorges region, with a total area of nearly 1,000 square km, according to Hu Wantai, director of the municipal planning and natural resources bureau.

Highlighting two signature sites, namely Huanghua Island, which is located in the middle of the river, and Shibaozhai, which accommodates a 12-story wooden tower built on the bank of the river, the core area as a whole resembles a heart-shaped bonsai tree from the air.

Boasting rich natural resources like rivers, streams, islands, wetlands and grasslands, the area is also home to many other historical sites, ancient towns and cultures.

The municipal government plans to build more attractions such as an ancient salt-transport-themed footpath, historical and cultural corridors, and Three Gorges cultural expositions to promote tourism in the area.

Supporting transport and tourism facilities will be improved and ecological protection will be enhanced in the area, according to the plan.