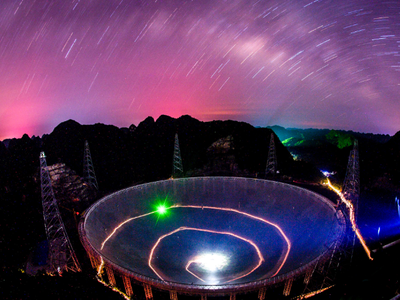 With the help of the world's largest radio telescope, Chinese scientists have made progress on the observation of interplanetary scintillation, a phenomenon that can be used to study space weather.

The radio signal from a distant compact radio source is scattered by the solar wind, and consequently, a random diffraction pattern is observed on Earth. This phenomenon is known as interplanetary scintillation (IPS) and ground-based IPS observations in turn can help infer the physical properties of the solar wind.

Researchers from the National Astronomical Observatories under the Chinese Academy of Sciences have made an analysis of the solar wind through IPS observations with China's Five-hundred-meter Aperture Spherical radio Telescope (FAST).

Thanks to the ultra-high sensitivity of the FAST, solar wind speed information was obtained in only 20 seconds, much less than the time required by conventional radio telescopes, the research team said Tuesday.

"FAST is promising to play a unique role in IPS study," said Peng Bo, the corresponding author of the study, which was published online in the Monthly Notices of the Royal Astronomical Society.

An anonymous referee commented that the study was "novel and of benefit to the wider astrophysical community."

According to the study, although the solar wind can be observed directly using a satellite or spacecraft with relatively high accuracy, ground-based IPS observations are a more economical method to obtain information on the solar wind such as velocity.

The IPS phenomenon was discovered in the 1960s and many countries, including Britain, the United States, Japan and India, have undertaken IPS studies since then. In China, IPS observations started in the 1990s.

FAST is the world's largest single-dish radio telescope, with a reception area equal to 30 standard football fields. Located in a naturally deep and round karst depression in southwest China's Guizhou Province, it officially began operating on Jan. 11, 2020.