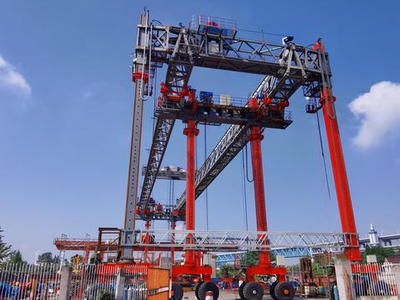 Developed by China Railway Science & Industry Group Co., Ltd and China Railway Construction Engineering Group, the robot is planned to be used for the construction of a metro line in Guangzhou.

Equipped with 72 sensors and 50 cameras, the robot is 80 meters long, with a weight of 460 tonnes and an effective span of 69 meters. It can install beams weighing up to 120 tonnes.

A total of eight independently movable legs consisting of 32 tires allow the robot to walk more flexibly and cross obstacles.

Adopting Beidou positioning technology, the robot has a measurement accuracy of 10 millimeters, and has applied for two national invention patents, said one of the researchers.